The IMO limits SOx emissions by regulating the sulfur content of marine fuels with 0.1% for the emission control areas effective from 1 January 2015 and the anticipated global sulfur limits to 0.5% effective from 1 January 2020 (subject to review in 2018). Additionally, all ships to use fuel with a maximum sulfur content of 0.10% when ‘at berth’ (including at anchor) in EU ports since January 2010 and beginning in 2020, the EU will limit sulfur in fuel to 0.5% for operation in EU territorial seas irrespective of the outcome of any IMO determination in 2018. All these will promote increasing use of exhaust gas cleaning systems, such as SOx scrubbers as an alternative to low Sulphur fuel.

Despite the foreseen trend of using SOx scrubbers, the decision of building a new ship or retrofitting an existing one is not simple, due to the current uncertainty with the entry into force of the 0.5% global sulfur limit and the cleaner fuel alternatives such as LNG. However, considering the promise of the advantages that may be gained from use of SOx scrubber, the shipbuyers may decide to place ship orders with additional provision for using a SOx scrubber with the intention to complete installation in the future. This arrangement may be called “SOx Scrubber Ready”. In order to facilitate future modifications, the shipbuyers and shipbuilders must make a significant effort to figure out what features should be incorporated on a vessel and incorporate these in the shipbuilding contract.

NOx is a generic term for the mono-nitrogen oxides NO and NO2 (nitric oxide and nitrogen dioxide). They are produced from the reaction of nitrogen and oxygen gases in the air during combustion, especially at high temperatures. In areas of high motor vehicle traffic, such as in large cities, the amount of nitrogen oxides emitted into the atmosphere as air pollution can be significant. NOx gases are formed whenever combustion occurs in the presence of nitrogen – as in an air-breathing engine; they also are produced naturally by lightning. In atmospheric chemistry, the term means the total concentration of NO and NO2. NOx gases react to form smog and acid rain as well as being central to the formation of tropospheric ozone.

Sulfur dioxide (also sulphur dioxide) is the chemical compound with the formula SO2. At standard atmosphere, it is a toxic gas with a pungent, irritating, and rotten smell. The triple point is 197.69 K and 1.67kPa. It is released naturally by volcanic activity.

Inhaling sulfur dioxide is associated with increased respiratory symptoms and disease, difficulty in breathing, and premature death. In 2008, the American Conference of Governmental Industrial Hygienists reduced the short-term exposure limit to 5 parts per million (ppm).

NOx reacts with ammonia, moisture, and other compounds to form nitric acid vapor and related particles. Small particles can penetrate deeply into sensitive lung tissue and damage it, causing premature death in extreme cases. Inhalation of such particles may cause or worsen respiratory diseases, such as emphysema or bronchitis, or may also aggravate existing heart disease.

NOx reacts with volatile organic compounds in the presence of sunlight to form ozone. Ozone can cause adverse effects such as damage to lung tissue and reduction in lung function mostly in susceptible populations (children, elderly, asthmatics). Ozone can be transported by wind currents and cause health impacts far from the original sources. The American Lung Association estimates that nearly 50 percent of United States inhabitants live in counties that are not in ozone compliance.

NOx also readily reacts with common organic chemicals, and even ozone, to form a wide variety of toxic products: nitroarenes, nitrosamines and also the nitrate radical some of which may cause biological mutations. Recently another pathway, via NOx, to ozone has been found that predominantly occurs in coastal areas via formation of nitryl chloride when NOx comes into contact with salt mist.

NOx should not be confused with nitrous oxide (N2O), which is a greenhouse gas and has many uses as an oxidizer, an anesthetic, and a food additive.

NOy (reactive, odd nitrogen) is defined as the sum of NOx plus the compounds produced from the oxidation of NOx which include nitric acid. 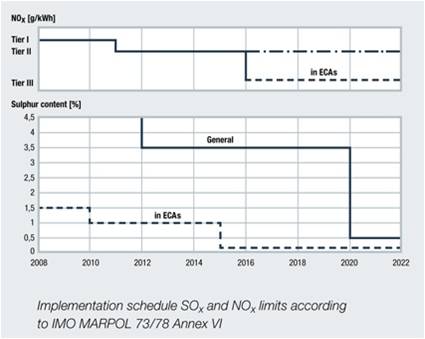 According to the Commission Implementing Decision (EU) 2015/253, the European Union has mandated rules concerning the methods and frequency of surveys conducted by the EU Member States for verification of the sulphur content of marine fuels being used onboard ships calling at EU ports.

According to the Decision, ship log books and bunker delivery notes on board are to be inspected on at least 10% of the total number of individual ships calling at ports in relevant Member State per year.

Further, as from 1 January 2016, the sulphur content of fuel being used on board is also to be checked by analysing a fuel spot sample drawn from the ship’s fuel service system or by analysing the relevant sealed bunker samples onboard or both of at least the following percentage of the above inspected ships:

Low sulphur fuel (0.1% or less) will be mandatory for all cruise ships berthing in Sydney Harbour after 1 October 2015 and in all New South Wales (NSW) ports after 1 July 2016. Owners can be fined up to $44,000 and the Master up to $22,000. In Hong Kong, all ocean-going vessels (above 500 GT) are required to switch to low-sulphur fuel (or LNG/or similar approved fuels) during the periods the ship is at a berth, excluding the first and last hour of the berthing period. The sulphur content of the fuel may not exceed 0.5%.